Introduction to library resources on women in glass. More information is available through the library catalog or by using the Rakow's Ask a Librarian service.
This article was written by Gail Bardhan and originally appeared in the Winter 2010 issue of The Flow and is reproduced here with the publication's permission.

Women have played an important role in glassmaking history. The following is a brief overview of the ways in which women have worked with glass before 1950, as documented in articles, books, and original materials from the Rakow Research Library of The Corning Museum of Glass. 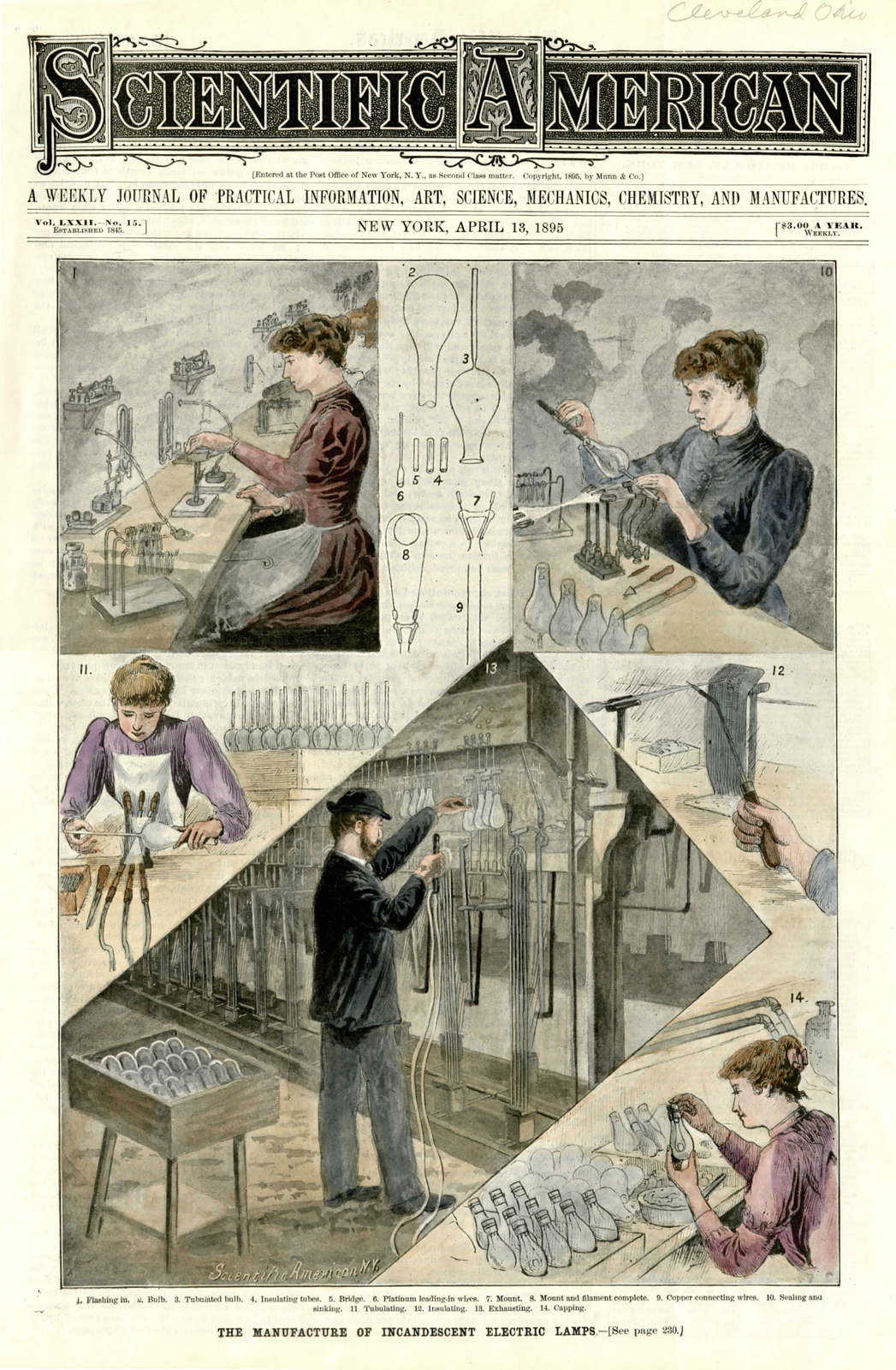 There is evidence of women acting as bead stringers as early as the mid-17th century. According to Francesca Trivellato, Venetian glassmaker guild regulations permitted female relatives of glass masters to have limited involvement in the manufacture of beads.

In the late 17th, 18th, and 19th centuries, there were itinerant female performing lampworkers. One Dublin 1740 newspaper article describes the talents of a Mrs. Johnson, who made human figures, birds, swords, ships, and other glass items. Traveling troupes in the United States included that of Madame J. Reith and Madame Nora Allen.

An article in an 1887 English glass trade journal states: "It may not be generally known that glass cutting as well as glass making is closed to the 'softer sex' in our country. While in France, Belgium, and Germany, it is a source of great industry and profit to them, a great quantity of the imported tumblers, wines, &c., are cut by women, and they are cut in clean, well-ventilated shops, nearly approaching comfort."

In the United States, late 19th-century glass cutting shops often employed women as waxers, washers, selectors, wrappers, roughers, and smoothers. Although late 19th-century reports mention women in the cutting departments in Pennsylvania, there is no certainty as to their actual tasks. While there were few women glass cutters, one exception was Matilda Ledig, who worked at Unger Bros. in Newark, New Jersey, as described by Judy Northup in The Hobstar.

By 1910, machine flute cutting was often done by women, and by the same year, needle etching was assigned to mostly women and children. An article in The Glass Industry reports that by 1929 mostly women and children were doing cutting. Changes in fashion and thus in equipment, from brilliant to light cut glass , resulted in the hiring of more women, and girls were apparently much quicker to learn than boys.

Scottish artist Helen Munro Turner (1901-1997) first submitted designs for both traditional intaglio work and more modern designs for candlesticks and light fittings to Edinburgh & Leith Flint Glass Works in the 1920s. She studied under Wilhelm von Eiff in Stuttgatt, from 1938-1939, where she learned glassmaking and glass decorating techniques and then returned to England, where she visited glass collections, factories, and designers, and established a studio. In 1941 she established the department of glass engraving at Edinburgh College of Art. Her engraved work is well known, from small gift items to large commissions, including the windows on the staircase in the National Library of Scotland.

European firms recognized and utilized the talents of women before the United States accepted their designs for glass. Suzanne Lalique Haviland, daughter of René Lalique, reportedly made designs for her father's factory for glassware and perfume bottles. Female Swedish glass designers from 1900 to 1950 included:

The Annual Report of the United States Commission of Labor, published in 1902, stated: "Some manufacturers do not want female designers ... Once employed, they are preferred, because they are naturally of a more artistic temperament. They display more taste, are always reliable, and can do fully as good work as men. lt is the opinion that the competition and employment of women in the field of design ... has tended to improve the work of men." 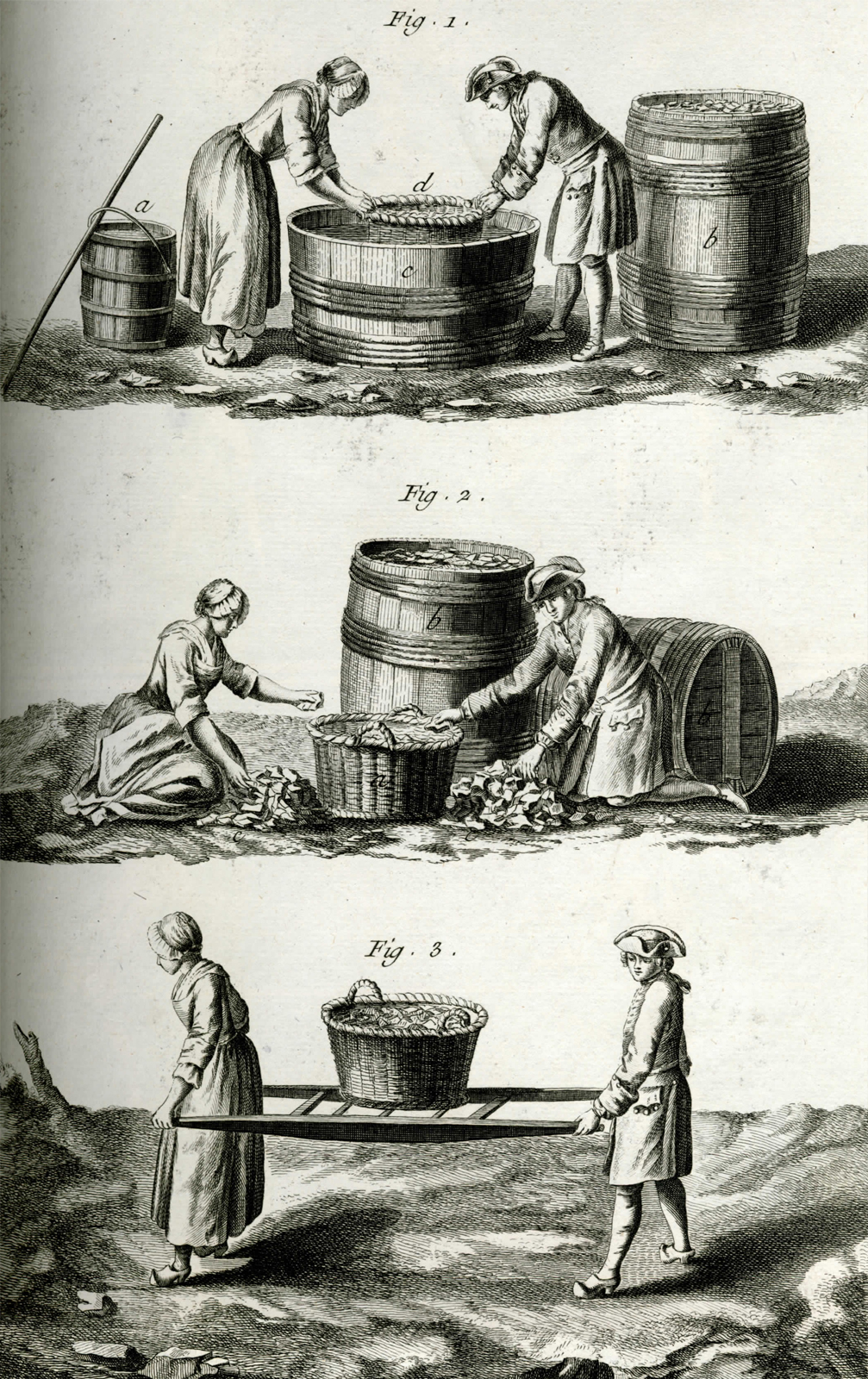 The 18th-century French encyclopedist Diderot depicts women sorting, washing, cleaning, and carrying cullet, as well as picking cullet out of broken pots and acting as sweepers in a crown glass factory. (See Figure 3 .) Postcards show women working in Belgian factories around 1900 in a variety of jobs: removing bottles from the lehr; sandblasting; packing in bottle factories; and splitting, flattening, and carrying finished cylinders in cylinder glass factories. (See Figures 4 and 5 .)

Martha Hassell conducted an in-depth study of women in the Boston & Sandwich factory. Census records indicate that most women employed at the factory were decorators, although some were involved with grinding, polishing, fitting stoppers, and cleaning/oiling the molds used in pressing. The one woman who is recorded as a cutter probably did roughing work. Sisters Mary and Emma Gregory worked as decorators at Sandwich, but they most likely did not depict white enameled figures of children, as is popularly believed.

A book by Virginia Penny reported that women were involved in rough grinding, clay preparation for the molds' making stoppers' capping lamps, papering ware, tracing, embossing, staining, and enameling. By 1900 American women were still mostly working in tableware factories and were not involved in the production of bottles and jars, except for covering demijohns. Within a decade, American women were working at the lehr and the finishing rooms. 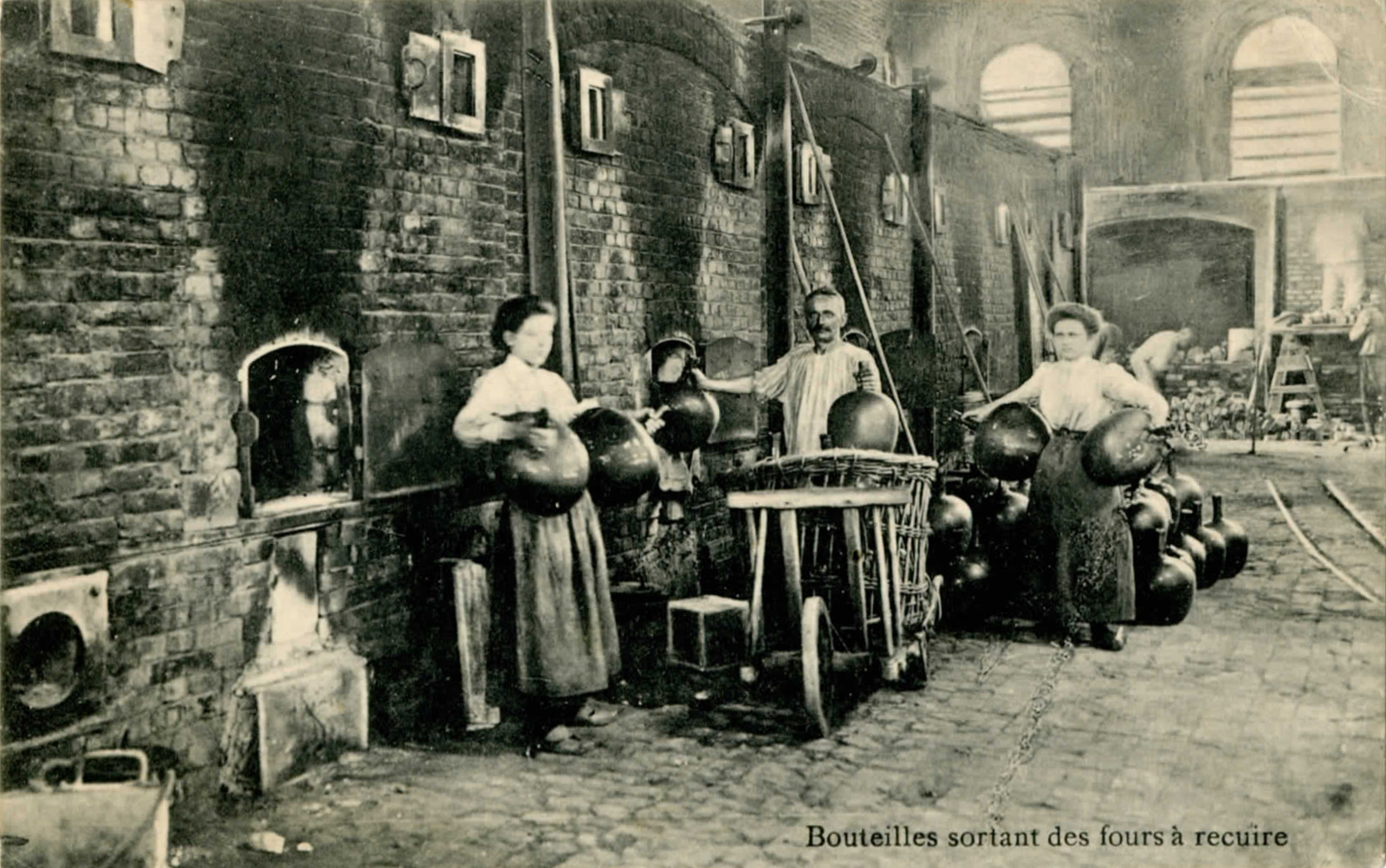 Various United States Bureau of Labor reports mention that the hand-decorating tasks of painting, gilding, enameling of lamps, vases, and other similar tasks were attractive, but other jobs such as sandblasting and furnace work were physically disagreeable and harmful to those completing the tasks. Factories were, therefore, reluctant to employ women in certain jobs. The jobs allocated to men also required higher skill levels and longer periods of apprenticeship. Women were given jobs that required less training, since they were not expected to work many years. 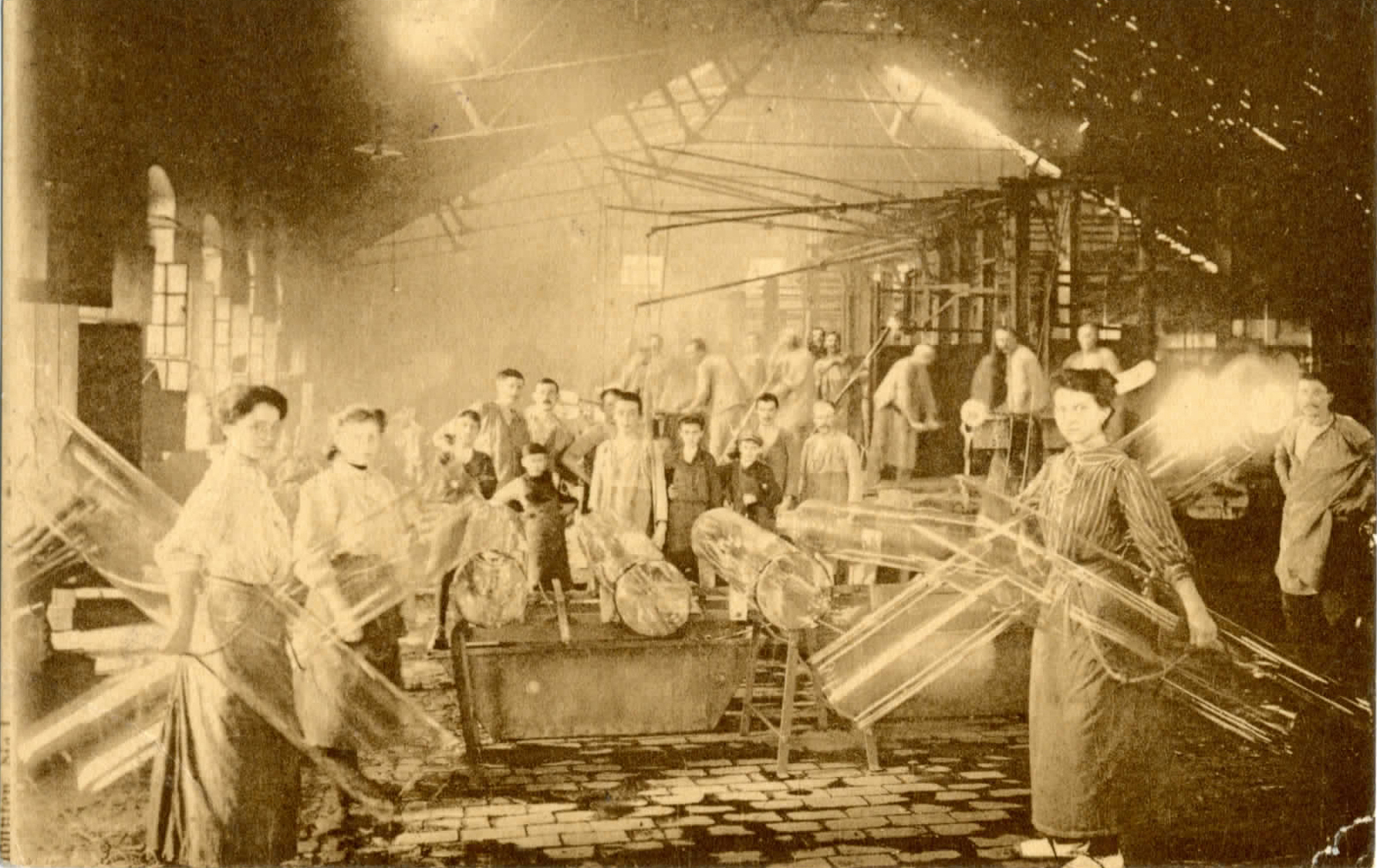 The one area in which women artists have always contributed is stained glass, primarily in tracing and painting, although some women have also designed and executed windows. A brief listing of early artists includes:

Women Stained Glass Artists of the Arts and Crafts Movement (1988) states that by 1900 women had begun to have professional careers on par with men, and many female stained glass artists had been educated in art schools. Of note are Veronica Whall; Irish artists Wilhelmina Geddes, Evie Hone, and Catherine O'Brien; and Scottish artists Margaret Chilton and Marjorie Kemp. In the same period, we know of French artist Marguerite Huré, who founded her own atelier in 1920.

Prior to 1900, American women were designing windows. Some of their work was displayed at the Columbian Exposition in 1893. Many had trained in established, well-known studios. Freelance artist Clara Burd worked for Tiffany, Lamb Studios, and Church Glass, but maintained her own studio.

There were several female painters who designed for Tiffany in the 1880s and in the 1890s. Tiffany used the talents of Agnes Northrop (who worked until she was 94!), Mary McDowell, and Elizabeth Comyns for window designs. Tiffany created his Women's Glass Cutting Department in1892, where the women were allowed to both select and cut glass, thus ending a male monopoly.

An article in The Art Interchange in 1894 discusses the work of Clara Driscoll and her staff at Tiffany Studios, who created both leaded windows and mosaic friezes and small objects. According to Martin Eidelberg, it was believed that "women were more sensitive to the subtleties of coloring and irregular shapes, whereas men were considered better suited to regular, repetitive work." Eidelberg's catalog and articles, as well as an article by Maureen Clarke, will be of interest to those wishing to pursue the topic of women working for Tiffany.

Prior to 1950, the focus of glassmaking was primarily on factory work, and there were few independent artists of either gender. Both Frances Higgins and Jaroslava Brychtová began working in the 1940s. Edris Eckhardt didn't begin working in glass until 1953, and the American studio glass movement developed in the early 1960s.

No summary of women in glass would be complete without mentioning female researchers who have studied and written about glass. At the Rakow Library you'll find archives of American glass scholar Helen McKearin; Dorothy Blair, researcher of Japanese glass, and Dorothy Daniels, one of the first to publish a book on cut glass. The Rakow Library houses the archives of Katherine Lamb Tait, head designer at the stained glass studio founded by her grandfather. Gladys Davidson Weinberg is known for her research into ancient glass.

Ginny Ruffner investigated the gender gap in the glass field in the late 1980s and published an article in American Craft. Thomas Buechner, founding director of The Corning Museum of Glass, commented: "From the beginning of the history of the studio glass movement, some of the most powerful figures in the field have been women. They came on strong early in the game. As a matter of fact, glass is one of the rare fields I don't think of as predominately male or female." Susanne Frantz, curator at Corning at that time, commented: "Women helped make slumping, fusing, painting on glass, and pâte de verre more prevalent. By developing these techniques as alternatives to blowing, they have given women coming into the field more options." The women working with glass prior to 1950 provided the ladder for the accomplishments of those who entered the field after that date.

Interlibrary Loan (ILL) is a cooperative library service that allows you to borrow materials through your local library.

For more information visit our ILL page or e-mail ILL@cmog.org.